The Brothers’ War Commander preconstructed decklists have been revealed and with it comes another round of my precon upgrades. We’re going to do a thorough analysis of each deck, highlighting its goals and how well it accomplishes them, check out its deckbuilding fundamentals, identify its strongest and weakest cards, then use all that information to make TWO upgrade lists:

Whereas Urza’s Iron Alliance was all about bolstering artifact creatures, Mishra’s Burnished Banner is the polar opposite in Artifact strategies: this Grixis Artifact deck focuses on noncreature artifacts and wants to sacrifice them for value instead of buffing them! Sac fodder like Ichor Wellspring or Spine of Ish Sah are sacrificed to fuel powerful effects like cheating out artifacts with Smelting Vat or protect other artifacts with Slobad, Goblin Tinkerer. The deck has plenty of ways to get back your sacrificed artifacts with cards like Emry, Lurker of the Loch and double the sacrifice value with Ashnod the Uncaring, rewarding you even more for your sacrificial goals.

If you want a Grixis Artifacts deck that focuses hard on Aristocratic goodness, then Mishra’s Burnished Banner is for you!

Before we talk upgrades, let’s take a look at the stock list to see what we’re working with:

Mishra’s Burnished Banner is all about sacrificing Artifacts for value: I count 63 cards that are either artifacts themselves or care about artifacts, the majority of which are sac fodder or sac outlets. 36 of the artifacts are noncreatures, which is only relevant for a handful of cards like Workshop Elders and most notably our commander, Mishra, Eminent One.

There’s only two potential precon commanders found in this deck: Mishra, Eminent One and Ashnod the Uncaring, both with specific deckbuilding desires:

Of the two commanders, Mishra makes the most sense to be the leader of an upgraded precon: he cares specifically about noncreature artifacts and the precon was essentially made for him in mind, so upgrading the deck with him in mind would be its natural progression. He’s also absurdly powerful even on a low budget, basically able to combo kill with a ham sandwich.

Now that we’ve glanced at the stock list and settled on our commander, let’s take a closer look at the deck itself to identify what parts benefit the most from upgrades.

As I often explain in my Budget Commander articles, every time I build a rough draft of a deck, I make sure I have a certain ratio of mana, interaction, card advantage, etc. This gives me a reference point to compare to the deck and see which areas may need improvement. My general ratio is:

That’s always my starting point, which is then tweaked to suit the individual deck’s strategy and further tweaked with playtesting. I always find it immensely useful to figure out some quick ways to improve the deck in question.

Let’s see what the rough ratios are for Urza’s Iron Alliance and how it compares. I count:

The ratios looks great aside: the card draw is high but I was being pretty generous on what I counted and basically all of it is incremental draw. There’s some really tantalizing inclusions here, such as Spine of Ish Sah which looks amazing when paired with Smelting Vat, or the new Blast-Furnace Hellkite which looks fun. There’s also some other cards that fit the theme and get the job done but are overcosted, such as Hellkite Igniter (nostalgic but we can do better).

I think the only disappointing options are some of the removal: Blasphemous Act is a staple, but [Terisiare’s Devastation]] looks overcosted, and the spot removal like Abrade are fine but don’t synergize with the deck. I will focus on more thematic and powerful options in the upgrades.

I have some specific goals when upgrading Mishra’s Burnished Banner:

We’re doing two upgrades for this one:

The $30 upgrade is going to be absolutely devasting as we add a bunch of game-ending combos. Behold:

There’s too many combos to list, but I love both Nexus and Heart the most here because they’re excellent cards by themselves and just so happen to win the game if we set up the combo.

The old-border upgrades is harder to match a $30 budget so I didn’t bother. Instead I add 10 cards that are upgrades you’ll want for power without worrying about the actual budget costs.

Disclaimer: Card prices are volatile and may be different at the time you read this article.

Here’s how I’d swap in $30 worth of upgrades. If you want to upgrade on a smaller budget then just makes less swaps:

The deck is now faster thanks to mana discounts like Etherium Sculptor and leans heavily into the artifact themes, swapping generic removal with artifacts like Meteor Golem. We can also set up infinite turns with Gonti’s Aether Heart and I’ve even added two synergistic ways of tutoring it up!

Here are 10 old-border cards that pump up the deck. I left out the super egregious cards like Metalworker, which honestly I recommend just proxying if you want it.

Similar to the $30 version, the ramp is far more explosive, with everyone’s favorite Artifact Overlord, Urza, Lord High Artificer being the most obvious and most powerful addition, and we snag some powerful old border cards from the other precon with stuff like Emry!

That’s my upgrade for both Urza and Mishra. Let me know what you think about these decks and upgrades! I’ll be back soon with a very meme-y but powerful Budget Commander later this week! 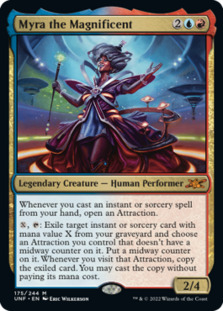 Magic30 Leftovers being moved to Stores.

The glory days are over.